The talks of a trail run in Pondicherry were making the rounds of PDP-a track for our speed workouts. We heard stories about how pretty the route was, but nothing prepared us for the real thing!

As we gathered outside our beautiful heritage hotel in pitch darkness at 4.15am, we experienced Aurovillian hospitality for the first time. The last bus taking us to the race (held in Auroville, a 30 minute bus ride away) was leaving……without us! So our friends brought the organizers to our hotel to get us! Luckily we were just a block behind and we made it!

As we reached the holding area we were welcomed by a booming Frenchman announcing that the full marathon just begun at 5am under the starlit sky. These runners would run with a torch light illuminating the unknown trail for a good part.

As minutes of the cold early morning ticked by, we were roused out of our lethargy by a pop song from the eighties. A local French aerobics instructor was demonstrating a warm up routine. The 300-odd half marathoners followed the Jane Fondaesque routine. By the end of 15 minutes there were smiles all around and the entire atmosphere loosened up.

We approached the start of the race whose tag line was “Joy of Running”.

With tentative steps we took off into the darkness along the dirt trail, which was full of surprises. We had the sound of the birds to accompany us, and at other times we experienced solitude. It was a meandering trail, narrowing to a single person path at some points. 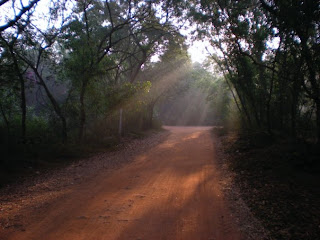 We approached the first water station at dawn, where the local residents greeted us with enthusiasm, and offered us water in paper cups. The amazing thing was that a few meters ahead they had set up cardboard boxes where we could dispose off the glasses without breaking our tempo, and more importantly without damaging the environment.

By daybreak I reached the 6k mark and I see 2 of my friends returning! I wondered if they were so fast or I was too slow! A few moments later they told us that they were lost! They ran too fast in the dark and all in all in this race, instead of 21k they ran 26k!!!!!

Each turn along the route framed a new vista. The trail was also varied. It had a rocky trail, paved avenues as well as long patches of sand. There were also a couple of cattle traps which served as a few moments of rest. Along the run we heard several bird calls, and in the clearing on the side I even chanced upon a peacock. 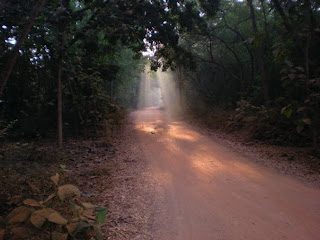 As the sunlight filtered through the trees we all set into a rhythm. I found myself running with Pervin. She’s a great runner and more importantly a bundle of endless energy. She has amazing ability to befriend others and encourage them to run at her speed. We found two runners from Bangalore who had never run a nonstop half marathon! So Pervin sang songs, cracked jokes and the kilometers flew by. As the Bangaloreans clocked their best times!

The magic of the morning was at its peak when we turned a corner and saw sunlight glinting off the dome of the sacred Matri Mandir. 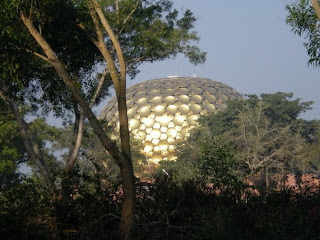 I had nursed a weak knee all week, and began slowly as I anticipated pain. Doubt surfaced at various points. By the 18 km mark I was flying. Here I found a girl from Chennai who had started walking. I encouraged her on- and these words pushed me too as we raced towards the finish. When there were last 400m left I saw Byram who told me to go for it. So I broke into a sprint only to be surrounded by a group of children finishing their 2km run. In my enthusiasm to finish I followed them and realized I ran 400 m in the wrong direction! I returned and finished eventually at 2.24!

As I reminded myself that this run is not about timing, it’s about the experience!

They served us hot South Indian breakfast as we waited for the full marathoners to finish. The simplicity of the event reflected the philosophy and mindset of Auroville. The ashram emanated peace and I felt one with nature.

We celebrated the run with friends over dinner, with joy and laughter as we sat around and talked of nothing. As we walked back to our hotel at midnight, under a bed of stars on the streets of Pondicherry I realized this was a day I would never forget. I had run a run that was permanently imprinted and had a memorable night which had completed the Miracle.

What the soul sees and has experienced, that it knows; the rest is appearance, prejudice and opinion……. Sri Aurobindo