We see banners for it over the next couple of days as we head out for snorkeling , kayaking and the likes. On Friday…..as we chilled in the hotel I investigated and discovered that it was a “mini- marathon “……only 10. 5 k- starting only 500 m from our hotel, on Sunday!

The “Mai Khao Turtle Marathon” is organized to save the turtles. This beach is a nesting ground for the turtles – so the locals organise it to raise awareness. It’s in its 7th year!

As I registered for it, Savio’s words rang true. A day before I was leaving, he said to me, run a race, they always have something going on. And sure enough …….

Raceday morning – bright and early- 5.30 I reached the holding area- and was greeted by the aroma of chicken porridge! They had laid out a complete breakfast- fruits, coffee et al, for the 750 odd participants. 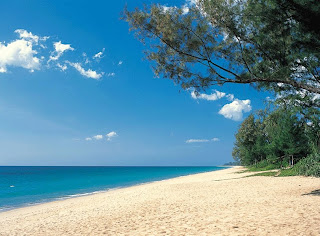 After the inaugural speech (which I didn’t get a word of as it was in Thai) we were flagged off!500 of us….running to the rhythms of the sea….along a lovely trail following the beach- soft breeze and waving casuarinas.
Kilometers flew past as the shade of the sea changed from varying shades of azure to aqua……the white sand remaining a constant!

Water stations, volunteers, a simple rubberband at the halfway mark…..all well organised for a small run!

The run was enjoyable as the distance wasn’t daunting. There were a few tourists like me trying to catch the local flavor.

I picked up pace as we ran the last 3k around lake Pru Jeh San. It was a picturesque trail which reminded me of Pondicherry.

I finished comfortably in just a minute over an hour. As I sprinted across the finish line I was handed a tag followed by a medal. As I caught my breath I read the tag to realise I had come fourth in the women! I got ranked! Wow! In a single digit!

I walked back to the holding area to see an awards ceremony going on. A Thai news reporter saw the tag in my hand and beckoned me to go towards the stage. Up I went and accepted my trophy. My first one ever!

I returned to my room and found my kids waiting for me. After so many runs they have learnt now NEVER to ask me if I won. So they asked….finished? And I surprised them with the trophy and my rank! Never mind the small number that ran! I still won! Wow Sanjana says, ” we’ll need to make a cabinet for that!”. 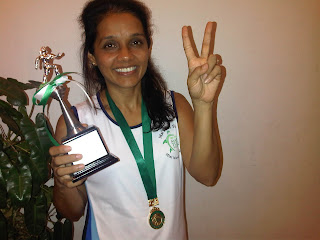 I believe there’s an inner power that makes winners or losers. And the winners are the ones who really listen to the truth of their hearts.
Sylvester Stallone

6 thoughts on “Save the Turtle!”